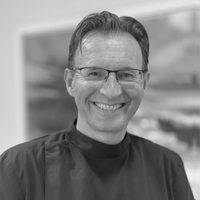 Qualified in 1993 from the University of Wales College of Medicine (Cardiff).

He joined HM Armed forces for 18 years serving in the United Kingdom and overseas. During this time he was a General Duties Dentist to elite regiments and served on two operational tours in Bosnia and Iraq. He was a Vocational Trainer for newly qualified dentists. The MCGDent was awarded in 1999 and the MGDS RCSI qualification in 2003 from the Royal College of Surgeons. He was awarded a Masters degree in Endodontics (root canal treatment) in 2006 from the prestigious Eastman Dental Institute.

From 2006 he offered a referral service and lecturing to all three branches of the Armed Forces worldwide. He also ran a hands-on endodontic course. After leaving the forces he lectured and offered endodontic referral services in the North West and West Midlands.

He was an Honorary Clinical Lecturer and course lead in postgraduate Endodontics at the University of Central Lancashire in Preston. He taught the Certificate, Diploma and Masters programmes.

He was admitted to the Specialist List in Endodontics in 2015 and is a member of the British Endodontic Society.

He offers non-surgical and surgical endodontics under microscopy. In addition, trauma management and internal bleaching.

He is married to Charlotte and has two teenage sons.

His main interests away from work are sporting and outdoor pursuits including keeping fit. He is an avid golfer and has been a local rugby coach.

He is happy to return to the referring dentist for restoration or this can be provided by one of our restorative clinicians if requested.